To provide an environment and opportunities for learning, recreation, and personal growth for all the residents.

The Hempstead Public Library was started by Mrs. Chauncey C. Parsons and Miss Harriet Mulford,who thought that the Village of Hempstead needed a library. They made up a Founders Committee of prominent members of different churches in the village. The Baptist, Episcopal, Roman Catholic, Presbyterian, Methodist, and Swedenborgian religions were all represented, in turn, on the Library Board.

The Founders Committee called a public meeting announcing that the library was for the general public and adopted the name, The Hempstead Subscription Library. One hundred and thirty subscribers were secured at $1.00 per year. The library bookcases were installed in a grocery store kept by Miss Mary Smith. Miss Smith also agreed to act as librarian for $28.00 per year, to be paid quarterly, and in 1889, the library was opened to the public. Eighteen years later, in 1907, it was incorporated under the name Hempstead Library Association and eventually became the Hempstead Library.

On June 24, 1951, the library was reincorporated as the Hempstead Public Library and opened at its present site.

The Hempstead Public Library is fully accessible to the handicapped. There is free patron parking in the lot behind the Library. 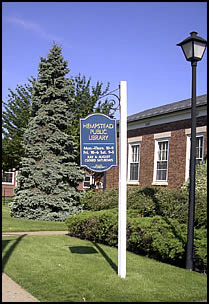